Here's what it takes to make a bunch of grown people in my neck of the woods act like Jesus has come home: 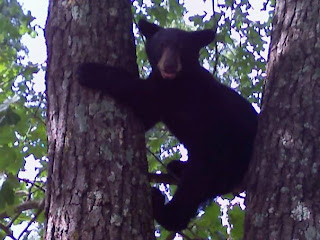 We were pretty shocked to see this in our driveway. I don't know anyone who has ever seen one in our area before now, but apparently, there are now at least two out there. As exciting as it was, I was really surprised at the reaction in the area: It was like the First Baptist emergency phone tree had been activated! Within a couple of hours everyone knew about it, was talking about it and had it surrounded in this tree taking pictures of it. At one point, it finally gave up and just took a nap up there. Poor bear. I guess as long as it doesn't decide our bottle calves look like tasty little morsels, I'm fine with it.
Posted by Gertrude Groggins - at 9:14 AM

Gertrude Groggins -
I was told that eclectic was the best word to describe myself. What does it say about me that I had to ask? Gah, that's way too much to ponder at the moment. The "sounds mundane but really isn't"- I'm a wife and a momma and I work all day at a job that I'm not completely convinced I understand but seem to be good at. I live smack in the middle of the good ole U.S and everything that goes with that. It's beautiful and charming and the people are friendly if not slightly backward thinking. But in the words of the immortal Forrest Gump, "That's all I have to say about thay-ut." After all, if I put everything here, what's the point in the blog?