In the absolute absense of an idea for today's blog, I've decided to introduce you to my little piece of the world. Everyone drives through my area to get to Branson, but Branson ain't got nothin' on my neck of the woods. Isn't ain't a strange word? I can only deduce (after years of schooling) that it's a contraction for ain not. I just haven't figured out what ain means. Anyway, back to home:

There is a drive-in movie theater in the town that I live. I just wonder how many working drive-ins are left? It's a pretty cool thing to be able to pay five bucks apiece and see two movies! Plus, the snack stand puts every other movie theater to shame with the Sunset Burger. Sure, it's just a sloppy joe, but you won't find that at your local Wehrenburg will you? 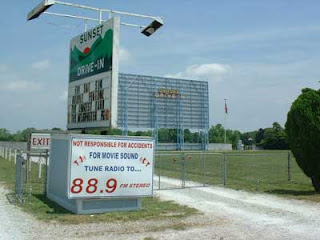 And a mere six miles away, in the town I grew up in, we have white squirrels. That's correct, WHITE ones. There is a long-standing debate as to whether they are true albinos and some will describe them as ghostly. I think the ghostly thing is a bit of a stretch. Ghostly. Squirrel. Not nearly as scary as say... Rabid. Squirrel. 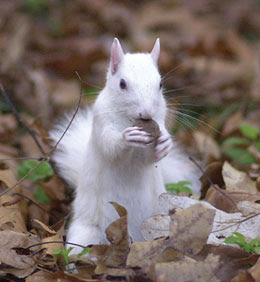 Last for today (this one really is scary) is the MOMO. MOMO is short for Missouri Monster and you haven't BEEN scared until you've encountered the MOMO. In fact, it's well known that he scares you SO badly, you can't remember to use your camera and capture him on film, so you'll have to excuse the absense of a pic on this one. Suffice it to say he is 7 foot tall with a pumpkin shaped head. He eats dogs and emits a really foul odor. I can only offer up this action figure rendition of him (behold the fear on the young-man-action-figure-face!!): 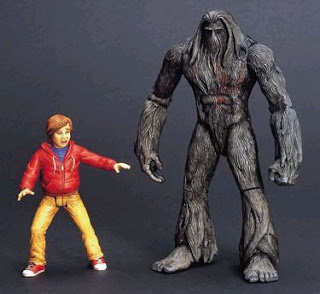 If you have not already bought a plane ticket or started making plans to visit this area, well... I just can't imagine what the hold-up is.

Posted by Gertrude Groggins - at 9:10 AM

Gertrude Groggins -
I was told that eclectic was the best word to describe myself. What does it say about me that I had to ask? Gah, that's way too much to ponder at the moment. The "sounds mundane but really isn't"- I'm a wife and a momma and I work all day at a job that I'm not completely convinced I understand but seem to be good at. I live smack in the middle of the good ole U.S and everything that goes with that. It's beautiful and charming and the people are friendly if not slightly backward thinking. But in the words of the immortal Forrest Gump, "That's all I have to say about thay-ut." After all, if I put everything here, what's the point in the blog?